What? I missed a week? I deny everything!
In all honesty – I’ve suffered from writer’s block. Every GM suffers from this dreadful affliction once in a while. This point where we don’t know where our campaign is going, or even where to start. I sometimes have days where the words fly off the page, and other days where just nothing seems to get done. 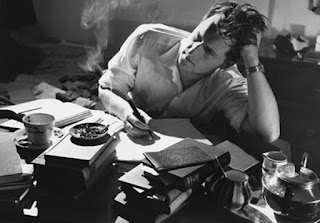 So let’s make the best out of this situation and discuss the elusive malady that is writer’s block and how to treat it. Daniel spent some time yesterday encouraging me and he gave me two pieces of advice:
These two pieces of advice can drag you away from a writer’s block in a campaign (or in any creative work) actually, especially when you have the right framework to build off what you have just written.
To elaborate:

This is the most important piece of advice that Dan has ever given me, when it comes to roleplaying games. Most people, like me, end up first trying to come up with a concept in their heads and then writing it down. Because of this, ideas often end up being just that – only ideas.
When you just start writing, you first of all put your idea down into something more tangible. It is much easier to build off something that is actually there in front of you. Our heads can only hold 7 or so things at the same time, and that floaty vague idea is taking up one of those 7 spaces. So write it down so your internal RAM is cleared a little.

When you’ve written down your idea, start posing questions regarding the idea. Try to dig deeper into what your idea means and what it implies for the gameworld, or whatever project you are working on. The questions let you tie ideas together and propagate further into creating an interesting experience for the players.

In this case, I have this very specific idea in my head:
The players rescue this vampire chick

Daniel advised me to break down each part, and to pose questions off each of those parts.
The players. Rescue. This vampire chick.

The players
The players in my campaign are a supernatural SWAT team. They are there to clear out the monster of the week, either murder or capture it, and then return to the base to await their next assignment.
The most obvious question is:

Rescue
What do the players rescue the vampire from?
Mostly from the organization – she has been staked in the past, her coffin dropped within a ruin in Aleppo by a suicide squad. The suicide squad murdered all the cultists around the major threat and then placed here there. Normally, the squad would’ve been extracted, and the players would’ve found a recently awoken vampire, who has obviously slaughtered a lot of people. An open and close case, of course.

But now – now the players encounter the tomb, full of gore, due to the explosive collars that the suicide squad wears. The rebel faction within the organization detonated the collars prematurely, and causing both the vampire girl to awaken early, and for a huge amount of evidence to be left behind.

So why a vampire?
Because vampires are easy. The players can grok what a vampire is, and what it does, even though the campaign is new to them. Start with the familiar, deviate to the weird.

Why a chick?
Because players are chauvinistic pics. A girl is more likely to get rescued than to get shot. On the other hand, even the best laid plans don’t survive contact with the enemy players. I cannot be sure she doesn’t get shot, so the adventure needs to continue despite the players shooting her. But this is where the conspiracy comes in – I actually seem to have two conspiracies: The big bad’s conspiracy, and the conspiracy by the anti-hero trying to subvert the big bad’s plan. Hmm, this gives me some further insight in the campaign.

What does she look like? What’s her name? What are three interesting things?
Well, we might as well use another of Daniel’s lesson. Let’s write some details about her.

Why this vampire chick?
Well, apparently she was chosen because she was on hand by the big bad. She has been removed from the “archives” of the Organization, records forged and removed.

Rescue
The players can rescue/capture her. If they rescue her, she can give them insight into the conspiracy, giving them slight hints from her own point of view.
What hints, now I think about it?
Well, we have the exploding collars, and we have a hacker, so they might be able to hack the information that someone tampered with them. The players can also talk to our vampire princess, whom I think I will call Inanna, after the Sumerian goddess of fertility and war (that says basically all you need to know about the Summerians). She can probably explain that she was caught many years ago.

So what happens next?
Fortunately for me, I made a conspyramid! I know how the conspiracies will react to the players, and I know how  to take it further. And that only after analyzing just one idea I had, and all the questions that followed from it!


Thanks Daniel!
Posted by LordOfDorkness at 4:15 AM